Why Russia is standing aloof on the Korean Peninsula 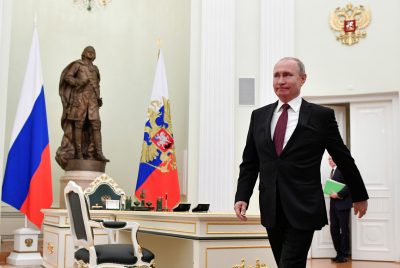 For more than a year there has been a flurry of diplomatic activity on the Korean Peninsula. But Russia is conspicuously absent from the big game. President Vladimir Putin is yet to meet his North Korean counterpart Kim Jong-un, who has already held four summits with Chinese President Xi Jinping, three meetings with South Korean President Moon Jae-in, and one rendezvous with US President Donald Trump.

Moscow did host the first ever Russia–China–North Korea trilateral at the vice foreign minister level in October 2018. Russia is also calling for the easing of sanctions on North Korea to reward Pyongyang for its peaceful gestures such as the nuclear and missile testing moratorium.

The Kremlin’s main geopolitical game at present is in the Middle East, not East Asia. In the wake of Russia’s intervention in Syria, Putin has emerged as the kingpin of the Middle East. This region is now consuming much of Moscow’s foreign policy bandwidth, raising the question of how much is left to spare elsewhere. This is not to say Moscow ignores the Korean Peninsula. But it treats the Peninsula as more or less a secondary priority on the list of Russian foreign policy concerns.

Russia’s relative passivity on the Korean Peninsula is also explained by Russia’s limited economic resources. Moscow cannot afford to generously subsidise North Korea as China does through oil supplies and other means. It is notable that Moscow denies as ’stupid’ the reports that Russia offered to build a nuclear power plant in North Korea in exchange for Pyongyang’s abandonment of nuclear weapons. According to Russian officials, Moscow is not able to make North Korea a gift as expensive as a nuclear power plant worth several billion dollars.

North Korea also lacks appeal to Russia’s powerful vested interests, including the oil and gas industry and the military–industrial complex. Unlike the Middle Eastern countries or Venezuela, North Korea has no oil. Admittedly, there is a long-standing idea of a Trans-Korean natural gas pipeline that would bring Russian gas to South Korea via the North. But Russia’s gas industry leader Gazprom does not currently view the Peninsula-routed pipeline as a priority in its Asian strategy. The project is high risk with no guaranteed funding.

Russia’s defence companies take little interest in North Korea because it has limited cash, not to mention the international sanctions that prohibit the export of military hardware to the North. For Russia’s most powerful economic actors, and apparently for the Kremlin itself, the bottom line is that you cannot make money in North Korea — you can only lose it.

Top Russian officials, including Putin himself, often praise China as the country that is contributing the most to the current diplomatic progress on the Peninsula. Russian diplomats emphasise that they are ‘very closely collaborating’ with their Chinese counterparts, with bilateral consultations taking place in Beijing and Moscow ’almost on a monthly basis’. The Russia–China collaboration in Northeast Asia is just one element of their ‘comprehensive strategic partnership’ that is only growing tighter under Trump. Moscow is unlikely to do anything on the Peninsula that would run against the basic interests of its main strategic partner.

The Kremlin is well aware that Korea is vital for China’s security and recognises that Beijing’s stakes in the Korean Peninsula are significantly higher than Moscow’s. What is expected in return is Beijing’s acknowledgement of Russia’s interests in the areas of paramount concern to Moscow such as Ukraine or the Middle East. There might even exist a tacit agreement between Russia and China that Moscow defers to Beijing on East Asian issues while, in return, China recognises Russia’s leading role in the Middle East.

Even though this strategy has never been spelled out officially or publicly, the Kremlin appears to have chosen to refrain from balancing China in East Asia. Mongolia is the only East Asian nation that can count on Russian security guarantees vis-a-vis China. Most of East Asia lies outside the area of Russia’s vital interests. Russia’s overriding priority there is purely defensive: keeping sovereignty over the geopolitically vulnerable Russian Far East. As long as Russia remains a formidable military and nuclear power, its Far Eastern territories are safe against aggression from any potential predator, be it China or anyone else.

Chinese expansionism in East Asia and the Pacific even benefits Russia because it diverts US attention and resources from confrontation with Moscow. The Kremlin will not lift a finger to balance Chinese advances in the region, including on the Korean Peninsula. Moscow is preparing to enjoy the spectacle of China and the United States battling it out in the Asia Pacific.