Why GAD reform matters to Myanmar 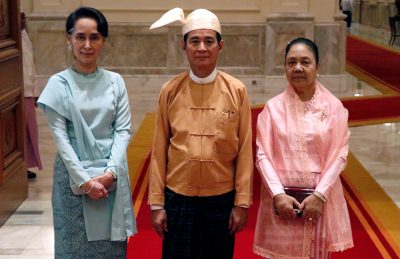 With its ubiquitous presence, expansive mandate and long history within the military-led Ministry of Home Affairs, the General Administration Department (GAD) has been Myanmar’s paramount government agency, acting as the backbone of public administration. News of its removal from Home Affairs and placement into the Ministry of the Office of the Union Government last December shocked many — widespread belief prevailed that the reassignment of GAD was a red line that the military would not tolerate an elected government crossing.

Removing a key department from a military-led ministry is notable, but there is more to be done. The National League for Democracy (NLD) government should think critically about how governance can be reformed to steer the country towards its goals of peace and full democracy.

For the NLD government, the GAD’s transition represents the most important public sector reform since democratic transition began in 2011. For State Counsellor Aung San Suu Kyi, the removal of the GAD from Home Affairs demonstrates that significant structural reform can be achieved under an NLD tenure, even reform that demilitarises the state apparatus by placing key departments under full civilian control.

The GAD’s power within government derives from its role in convening, communicating and coordinating across ministries rather than through its own executive decision-making power. Essentially, it is the ‘process manager’ over a large swathe of the country’s public administration. With the GAD transfer, the Office of the Union Government now has full control of the country’s paramount agency of administration.

The ministry could potentially play a powerful role in driving change across the state apparatus. The strong support from President Win Myint and Aung San Suu Kyi, with the weight of their executive mandates, can bolster inter-ministerial coordination and catalyse state administration reform-focused policymaking.

The President’s Office stated that the GAD transition was important for empowering the state and region governments and for preparing the country for a future federal union. The placement of the GAD in the Office of the Union Government may seem counter-intuitive, but the key goal is to give the state and region chief ministers greater discretion over the GAD. These executives oversee a wide range of the GAD’s day-to-day functioning and have long argued that the GAD’s performance and responsiveness would improve if placed under full civilian control.

Under the NLD Government, this sentiment intensified. The GAD is a powerful agency at all levels of government, but its critical role peaks at the subnational level, starting at the states and regions and emanating down to the over 17,000 wards and village tracts. The country’s 330 township administrators play a critical role interfacing between the government and the nation’s citizenry.

The reform of the GAD should stimulate decentralisation and is a necessity for any real progress towards peace and stability. Placing the GAD under full civilian control may not lead to immediate changes to local administration, but it expands the possibilities. At the state and region level, it may eventually allow for dedicated state and region civil services to emerge beyond the exceptional municipal offices that stand out today.

In the near term, chief ministers can use greater decision making powers regarding promotions and transfers to improve government. More influence in recruitment may also allow state and region governments to ensure GAD staffing better reflects local population makeup.

Given that the GAD acts as the civil service of the state and region governments, encouraging a more responsive GAD will allow these governments to manage the other departments under their purview. At the local level, the omnipresent legacy of military authoritarianism could see a reorientation towards improved public engagement, transparency and accountability, and to supporting local socioeconomic development.

Moreover, the GAD plays a central role in resolving major local grievances with government, particularly land issues. This means ensuring key government processes like land registration and management are fairer and more transparent is crucial to achieving socioeconomic development that is beneficial to all. The movement of the GAD out of Home Affairs and into full civilian control allows for a ‘re-imagination’ of Myanmar’s subnational governance that is more transparent, inclusive and accountable.

Myanmar faces many escalating challenges, foremost being the violence in Rakhine state. But the removal of the GAD from Home Affairs is a reform of historic significance. Many have reservations about the speed of change in Myanmar and concerns over the crisis in Rakhine, but the movement of the GAD is a significant step forward for Myanmar’s democratic transition and ought to be applauded. Removing the GAD from a military-led ministry is significant in itself, but the NLD should take full advantage of the opportunity to advance key reforms, most notably decentralisation.

Matthew B Arnold is the Myanmar Country Representative for The Asia Foundation.

The views expressed are his own and do not necessarily reflect those of the Foundation.

Steps for home buyers next week