The shadow of COVID-19 lingers over Bangladesh’s economy 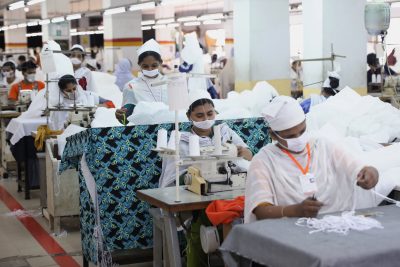 Bangladesh’s stable economic growth over the past two decades and its gradual integration into the global economy has made it a model for economic development. Bangladesh’s GDP grew by 8.15 per cent in fiscal year 2018–19 and higher rates were anticipated. Now the country is struggling to recover from the slowdown caused by the COVID-19.

Bangladesh’s economic growth is in dire straits, pulled down by deteriorating investment, external sector performance, employment and poverty. Approximately 34 million Bangladeshis, or 20 per cent of the population, live below the poverty line. This number is predicted to have doubled by the end of 2020.

The World Bank projects that Bangladesh’s GDP growth will be 1.6 per cent in fiscal year 2019–20. The IMF expects it to be 2 per cent. Bangladesh’s own Bureau of Statistics then provided a provisional GDP growth forecast of 5.24 per cent, still the lowest since 2009.

These still positive growth forecasts provide some comfort, especially to the government, given the massive disruption of economic activity. But considerable doubt has been raised among experts about the credibility of Bangladesh’s statistics given industrial and business activity was limited between late-March and May 2020 when a country-wide lockdown was in place. The government has since allowed economic activity to resume, subject to health and safety rules.

A large gap between reality and official statistics would be counterproductive in the effort to reinstate normalcy. Inaccurate statistics mislead financial intermediaries, the government’s own agencies and donors, preventing them from effectively addressing economic hardship.

The debilitating effects of the pandemic are being observed in almost all sectors of Bangladesh’s economy, especially the industrial and service sectors. In recent years, the industrial sector has emerged as the most important component of the economy and caters to the domestic market, export earnings and job creation.

The growth of nearly all subsectors of the industry has disappeared. Manufacturing growth has declined sharply. The average growth in manufacturing was more than 10 per cent from 2010 to 2019 and was 14.2 per cent in 2019, registering a mere 5.84 per cent in 2019–20.

Transport and communication, community and social services, bank and financial intermediaries, tourism, and wholesale and retail trade have all faced economic sudden stop. Agriculture is one of only industries that has kept up performance due to a bumper harvest of rice and unhindered output in other subsectors such as fisheries and livestock.

With a shrink in demand, COVID-19 has also impacted private domestic and foreign investment, savings and external trade. It has caused massive losses in employment and increased poverty. According to the Bangladesh Institute of Development Studies, the pandemic has led to 13 per cent of people losing work and a decrease in household income, pushing 16.4 million new people under the poverty line. This has serious implications for the country’s socioeconomic and developmental performance in the near and medium term.

The government has taken steps to counter the backward slide. It has initiated 19 stimulus packages worth about US$12 billion in total, accounting for 3.7 per cent of GDP. These packages are designed to help export-oriented industries, shipment credit, agricultural sector, and low-income groups, including farmers and micro and small enterprises to survive. The bulk of the support is disbursed in the form of loans.

Only the ready-made garment (RMG) sector has been able to make good use of these loans. This sector began to emerge from a gloomy performance in the fourth quarter of last fiscal year. Initially, from March to June, international buyers of the RMG sector either cancelled or postponed work orders. RMG manufacturers were then able to continue business using the loans before their situation improved from July and August 2020.

Stimulus payments to non-RMG industries has been slow. The RMG sector was successful in absorbing the stimulus packages due to their lobbying sway. Non-RMG firms, especially micro, small and medium enterprises (MSMEs), have not been adequately supported due to their lack of capacity influencing disbursing banks.

What is required now to rebuild the economy is to revise and balance monetary and fiscal policies to boost investment and create jobs evenly, to introduce new social assistance programs, to expand existing transfer programs and to establish public work programs. The pandemic also gives Bangladesh an opportunity to address its target of minimising the longstanding inequalities in access to health and basic services, as well as financial products and digital services for the poor.

Mahfuz Kabir is Research Director at the Bangladesh Institute of International and Strategic Studies (BIISS).

The post The shadow of COVID-19 lingers over Bangladesh’s economy first appeared on East Asia Forum.

If Joe Biden wins, he must play hardball against GOP obstruction. Here’s how.