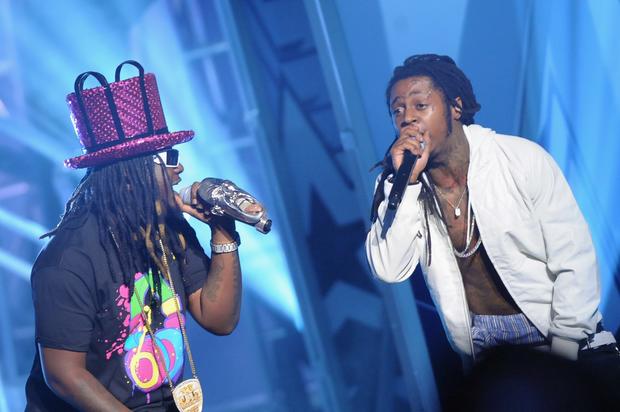 T-Pain was in the studio with Ebro, promoting his new album 1Up, when the conversation veered into interesting territory. According to the proverbial “Rappa Ternt Sanga,” a second collaborative mixtape with Lil Wayne is in the works – its predecessor fittingly titled T-Wayne is often regarded as the benchmark for revamped commercial viability, even though the project was never meant as a for-profit venture.

“We’re definitely about to do a T-Wayne 2, no question. I got a ton of hooks lined up already that I’m about to send Wayne and that’s just how we do it,” T-Pain remarked, as Ebro probed the “Masked Singer” on his future plans.

He doesn’t stop there, before touching on other subjects, such as his affinity for online gaming, and his early start with Akon over at Konvict Music, T-Pain added a few cursory details to his T-Wayne revelation.

“I was willing to take whatever’s gonna come at me for that, and I was like, ‘Bro, here’s some more Wayne music. Take it, man’ Whatever’s gonna come out of it, I’ll do that,” T-Pain professed out of loyalty to Lil Wayne, as he himself was once a victim of prejudice in the early 2010s when his musical output reached a standstill.

“But that whole thing he was going through with the Carter V and all the Cash Money, I was just like, man, this man doesn’t deserve that,” he continued. “I was willing to take whatever I was gonna get for that. That was my contribution to the music industry.”

With Wayne’s legal troubles high on the docket, T-Pain showed a willingness to step a back, when his collaborator needed a moment to himself. And yet, T-Pain never took his foot off the pedal. While the provenance of T-Wayne 2 is not a foregone conclusion, T-Pain has proven himself to be something of a truthteller in an industry wrought by underhanded manipulation – so, keep your ears peeled, to the ground.