Sri Lankan democracy on the rocks 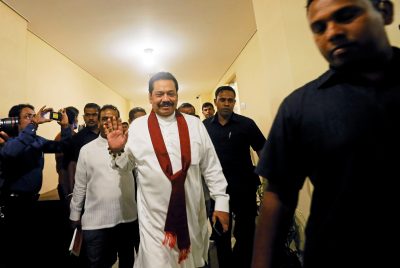 Wickremesinghe was reinstated as prime minister on 16 December as the coup attempt failed. But the relationship between Sirisena and Wickremesinghe remains in terrible shape. The causes underlying the crisis — mostly pertaining to domestic politics — remain unresolved. Sri Lanka is likely in for a bumpy ride this year.

The coalition government formed in 2015 became increasingly unpopular as the Sirisena–Wickremesinghe relationship fell apart. Still, an unconstitutional power grab was impossible to predict. During the crisis Rajapaksa and other members of the purported cabinet took over government ministries while supporters of the attempted coup took control of state media.

Sirisena moved to dissolve Parliament in November and wanted to hold a parliamentary election in January. Meanwhile, Rajapaksa lost two no-confidence motions in Parliament and Wickremesinghe won a confidence vote. Throughout the crisis, Wickremesinghe maintained that he was the legitimate prime minister.

On 13 December, the Supreme Court ruled that Sirisena’s decision to dissolve Parliament early was unconstitutional. This was a historic moment. Rajapaksa backed away from his claim to the prime ministership and ‘resigned’ from the post two days later.

Prior to the crisis, Rajapaksa and his allies were favoured to win the next round of national elections. This might still happen. Under Rajapaksa’s leadership, the Sri Lankan military crushed the Tamil Tigers, a separatist movement fighting for a Tamil state in the northern and eastern parts of the country. For many ethnic Sinhalese, Rajapaksa is a courageous war hero who oversaw the defeat of the Tigers.

But the war, which raged from 1983 to 2009, resulted in massive civilian casualties. Credible allegations of war crimes and crimes against humanity have plagued Sri Lanka ever since. After the war, Rajapaksa ruled in an increasingly corrupt, nepotistic and authoritarian fashion. Sirisena served as a cabinet member in Rajapaksa’s administration, which ruled from 2005 to 2015. But he unexpectedly unseated Rajapaksa in a January 2015 presidential contest.

During more than seven weeks of chaos and uncertainty, Sri Lanka’s institutions — including the Supreme Court, the Court of Appeal, Parliament and civil society — were tested. They seem to have held up well, consistently pushing back against Sirisena’s lawless escalations.

Sirisena’s reputation has been irreparably tarnished and he has no real hope of winning a second term as president. Ironically, Sirisena’s unconstitutional appointment of Rajapaksa as prime minister was likely done as a last-ditch attempt to garner a second term. From anticorruption to improved governance to economic reform, the coalition government was unable to implement key parts of its agenda. Sirisena does not have a political base and needed Rajapaksa’s support to have any chance of winning a forthcoming presidential contest.

Rajapaksa has been hurt as well, though he remains a political force to be reckoned with. Wickremesinghe and his United National Party have emerged stronger. But if Wickremesinghe and his party do not immediately start to display more competence than they have over the past four years, they are unlikely to fare well in upcoming elections.

A new United National Party-dominated cabinet has been sworn in and Rajapaksa now leads the opposition in Parliament. The 225-member body will probably struggle to get much done. Meaningful democratic or political reform before the next round of national elections looks unlikely. There has been no reconciliation between the President and the Prime Minister. Rajapaksa and his associates remain eager to return to power and will do whatever they can to foment chaos, promulgate misinformation and thwart the government’s agenda.

Had the coup succeeded, the country would have descended into a more authoritarian phase. Tamils and Muslims — oppressed minorities in a country that is overwhelmingly Sinhala–Buddhist — would have suffered more than they already are.

A longstanding democracy flirted with full-scale authoritarianism. After Wickremesinghe returned to a position that was his to begin with, the situation appears to have stabilised. Unfortunately, the underpinnings of the imbroglio — from power-sharing and policy failures to personality differences and political calculations — have not been resolved. Volatility, uncertainty and friction should be expected in the months ahead.

Taylor Dibbert is an Adjunct Fellow at Pacific Forum.

A version of this article originally appeared here on PacNet.

John River Releases Cinematic Video For "Before I Go"