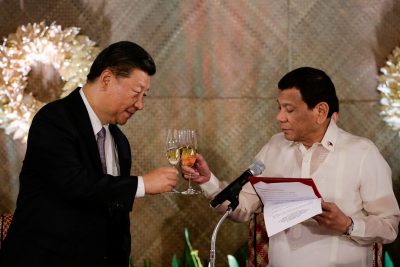 The Philippine 2019 Congressional midterm election was essentially a referendum on President Rodrigo Duterte — and voters overwhelmingly confirmed their support for the current administration. With the support of his PDP–Laban Party and allies that were elected to supermajorities in the Senate and the House of Representatives, Duterte is poised to deepen ties with China. 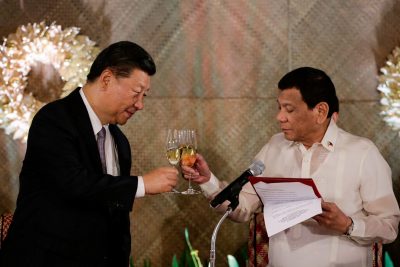 As Foreign Secretary Teodor Locsin Jr. explained in an interview days after the election, ‘China’s offer of a strategic partnership is a bit more attractive than the current [US] offer of strategic confusion’. While Locsin acknowledged that the US–Philippines treaty alliance was secure, his message was clear — the Philippines seeks greater cooperation with China regardless of US objections.

Emblematic of this cooperation with China is the government’s ‘Build, Build, Build program’ that aims to generate jobs and reduce poverty from 21.6 per cent in 2015 to 13–15 per cent by 2022 through development and infrastructure projects. Chinese foreign direct investment (FDI) and development assistance are integral to a growing number of these projects, exacerbating tensions with the United States.

Although the United States has managed to maintain strong ties to the Philippines’ national security establishment — clarifying its defence obligations under the Mutual Defense Treaty of 1951 and sustaining active military-to-military cooperation — it has been unsuccessful in preventing Chinese state and corporate involvement in projects relevant to US security interests. Without opposition legislators who share these concerns, this trend is likely to continue.

Once considered the last bastion of opposition to Duterte, the newly elected Senate hosts several prominent presidential surrogates including former national police chief Ronald ‘Bato’ Dela Rosa and former special assistant to the president Bong Go. Former senators Mar Roxas, Bam Aquino, and other opposition candidates from the Otso Diretso (Straight Eight) platform failed to win any of the 12 open seats. Between the support of the inbound Congress and the administration’s ongoing takeover of the Supreme Court through the appointment of friendly justices and the dismissal of chief justice Maria Lourdes Sereno, few institutional checks to the executive branch remain.

Before this session of the Congress adjourns, senators are considering allowing greater foreign investment through the amendment of the Public Services Act that mandates public services and utilities be at least 60 per cent Philippine owned. Senate Bill No. 1754 will re-define public utilities as the transmission and distribution of electricity, water works, and sewage systems — reducing or even eliminating foreign equity limits in industries like transportation and telecommunications.

The bill’s sponsor, Senator Grace Poe, argued that ‘increasing FDI and promoting national security are not conflicting goals’. If the bill does not pass during the current session, it will likely pass when the newly elected Congress reconvenes on 22 July 2019.

Reducing barriers to FDI will enable increased Chinese investment following the Belt and Road model, where Chinese companies purchase large stakes in other nations’ critical infrastructure. On 26 April 2019, the Philippines and China signed 19 business agreements valued at US$12.17 billion for projects across the country.

Among them is a US$298 million plan to develop the Grande and Chiquita islands, strategically located in Subic Bay. At the same time, two Chinese investors are competing with Japanese investors and others to take over Hanjin Heavy Industries’ shipyard in Subic Bay — the country’s largest shipyard. Formerly a US naval base, Subic Bay is still an active port for US naval vessels, recently hosting the amphibious assault ship USS Wasp during the 2019 Balikatan exercises. Consequently, both the United States and the Philippine Department of National Defense are concerned about Chinese investment in Subic Bay given the potential for tracking the movements of vessels visiting the bay.

Similar issues surround Globe Telecom’s partnership with Huawei to provide 5G service, as well as a proposed US$400 million Huawei-backed project to install a video surveillance system called ‘Safe Philippines’ in Manila and Davao City. ‘Safe Philippines’ was originally blocked due to concerns over the vetting and approval of the project but Duterte vetoed this provision citing his constitutional authority to negotiate foreign loan agreements.

Despite protests from the United States and a leaked memo from the Philippine Department of Foreign Affairs citing security risks associated with Huawei, a Philippine National Police inquiry uncovered no evidence of espionage. Although other government agencies are conducting their own assessments, the police decision is a strong indication that the Philippines will continue doing business with Huawei despite US concerns and regulatory restrictions.

As the Philippines pursues Chinese investment to finance ‘Build, Build, Build’, the US–Philippines alliance is strained by anxieties over Chinese cyber and maritime espionage. Yet the promise of future Chinese investment is a major incentive for the Duterte administration to reduce security cooperation with the United States — like the mostly unimplemented Enhanced Defense Cooperation Agreement that enables extended troop rotations and base expansion.

If the Philippines does not sustain its current economic growth and mismanages loans, its ability to pursue an independent foreign policy may be compromised by China’s ownership of Philippine debt and equity. The current drive for military modernisation and territorial defence would be jeopardised by competing priorities of servicing debt and additional funding needed to realise ‘Build, Build, Build’. Under these circumstances, the Philippines would have fewer options to fend off Chinese challenges to sovereignty, further straining the US–Philippines alliance.

While the notion that the Philippines will fall into a debt trap is contentious, a ‘rubberstamp’ Congress that is unwilling to press Duterte for accountability and transparency on national agreements with China offers few protections against this outcome.

Arjun Kapoor opens up about getting married