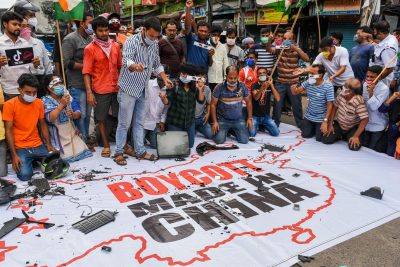 On 15 June 2020, a tragic and violent clash occurred between Chinese and Indian troops along their disputed border at Galwan Valley, Ladakh. The conflict resulted in significant casualties, including deaths on both sides. This was the most serious clash between the two countries since the 1962 war, which sowed the seeds for current border tensions.

India’s Ministry of External Affairs issued a statement that accused the Chinese side of violating the Line of Actual Control (LAC) and attempting to ‘unilaterally change the status quo there’. A statement from the Chinese Foreign Ministry responded that Indian troops on Monday ‘seriously violated the consensus of the two sides by illegally crossing the border twice and carrying out provocative attacks on Chinese soldiers, resulting in serious physical clashes’.

These contradictory statements reveal the danger of border conflicts between the two countries. The contested LAC allows both armies to enter common and disputed areas, creating the potential for dangerous confrontation. When these occasions of conflict occur, both China and India accuse one another of violating the LAC. The problem is that the ‘status quo’ is different for each country and both sides see the other party as pursuing aggressive strategies along the border.

The last thing both countries want is a major war. It has been reported that the Indian government has authorised changes to the rules of engagement that would allow its military to use firearms when necessary. And while the two sides have held three rounds of Corps Commander-level dialogues to de-escalate tension, each meeting has failed.

Beijing and New Delhi need to pursue a broad range of measures to avoid further conflicts. First, they need to agree to a mechanism that prohibits both sides from dispatching their militaries close to the LAC. The murky and contested nature of the line is the bedrock of dangerous face-offs. The two governments have made consistent efforts to minimise conflict, such as through bilateral military confidence-building and defence cooperation agreements in 1996 and 2013. The latter specifically stated that the two sides ‘shall not follow or trail patrols of the other side in areas where there is no common understanding of the line of actual control’.

Yet, these measures have failed to prevent increasingly frequent and dangerous face-offs. A more significant mechanism is required to truly disengage the two militaries. A mechanism should stipulate that both sides keep their patrols at least two kilometres away from the contested line and that neither side is to build new infrastructure, like roads and bridges, within five kilometres of the line. This arrangement would essentially mean partial demilitarisation of the border zone. It represents the most practical and realistic solution.

Second, further confidence-building measures are needed at the military and strategic levels. The two militaries have conducted small-scale joint exercises along the border to promote mutual friendship. Prime Minister Narendra Modi and President Xi Jinping have also engaged each other in numerous summit meetings in recent years aimed at dispelling each other’s strategic concerns.

The deadly clash on 15 June 2020 does not by itself invalidate the values of confidence-building. Prime Minister Modi, in an effort to restrain Indian domestic nationalism, stated on 19 June that ‘China did not enter our territory’. This admirable attempt by Modi showed that strategic confidence-building between the two countries has made a difference. China and India must therefore continue to expand their current confidence-building measures and not be distracted by isolated clashes along the border.

Third, China and India must try harder to buffer domestic backlash against any reasonable resolution to the border issue. Domestic politics and nationalism certainly make concessions by either side difficult. According to Sudheendra Kulkarni, an aide to former prime minister Atal Bihari Vajpayee, in 1960 the then Chinese premier Zhou Enlai proposed to Jawaharlal Nehru that China would accept India’s control over Arunachal Pradesh in exchange for India’s acceptance of Chinese control over Aksai Chin. Nehru rejected the compromise out of concern for domestic backlash. Kulkarni argues that this deal could have produced a permanent settlement of the border issue and remains a viable solution to the conflict.

The increasing frequency and deadliness of border conflicts — including the 2017 stand-off at Doklam — should motivate both Beijing and New Delhi to muster the political courage to settle the issue once and for all. This requires both sides to adopt flexible approaches and be willing to restrain domestic backlash against compromise. Both Modi and Xi command strong positions within their respective political systems and are therefore better equipped than their predecessors to make the necessary compromises.

Fourth, both the United States and Russia should be willing to mediate if another major crisis occurs between China and India. President Donald Trump offered to mediate the rising conflict in recent weeks, but his offer was mistakenly rejected by India. The current conflict constitutes the most dangerous and likely scenario for a major war precisely because of a lack of third-party restraint. Historically, great powers stand firm in major disputes, fearing loss of reputation. Third-party mediation offers the chance for both sides to de-escalate military conflict without losing face or credibility.

As the two most populous, nuclear-armed countries, China and India must pursue a broad range of measures to safeguard peace between them. Disengaging the two militaries, continuing confidence-building efforts and pursuing permanent resolution of the LAC are some of these measures. Among them, a disengagement mechanism between the two militaries offers the most immediate and realistic solution and should be the focus of current diplomatic efforts between China and India to prevent major war.

Baohui Zhang is Professor of Political Science and Director of the Centre for Asian Pacific Studies at Lingnan University, Hong Kong.