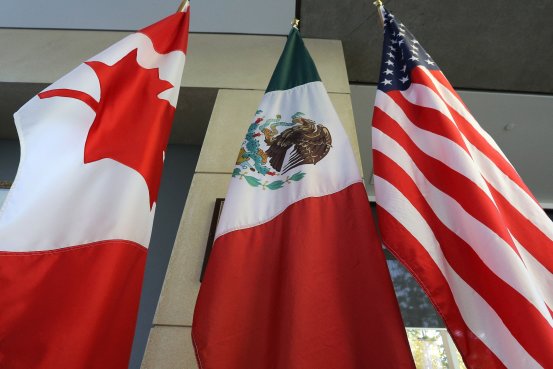 MONTREAL—Mexico and Canada have rejected a proposal by the Trump administration to remake a corporate arbitration system that is a key part of the North American Free Trade Agreement, according to people involved in talks to update the pact.

The two countries’ resistance to the U.S. plan to change the system, known as investor-state dispute settlement, or ISDS, could lead to its removal altogether from Nafta, as neither Canada nor Mexico is interested in allowing countries to opt out of the system, as the U.S. has proposed. The U.S. made the proposal with an eye to opting out of the ISDS system, which it says erodes the sovereignty of the U.S. by allowing multinational companies to circumvent domestic courts.

Under the dispute mechanism, arbitration panels now hear complaints from corporations that their overseas investments were unfairly treated by an action by another Nafta government. The system is widely backed by multinational businesses because it allows them to avoid lengthy court battles and potentially discriminatory treatment abroad.

Officials from the U.S. Trade Representative’s office declined to comment on the proposal or the trading partners’ reaction to it, saying the negotiations are ongoing.

The future of the system, along with other dispute-resolution issues, is among the thorniest parts of Nafta negotiations, and is expected to be among the last to be resolved if negotiators are to be successful in rewriting the 24-year-old agreement. The three countries have aimed to complete the talks by the end of March, but many lobbyists and other officials watching the negotiations say they will have to accelerate their pace in order for that deadline to be met.

The sixth round of Nafta talks was scheduled to conclude Monday, after which U.S. trade representative

and his Mexican and Canadian counterparts were expected to issue a joint statement on the negotiations’ progress. In Montreal, negotiators were able to finalize a chapter on anticorruption issues, according to an official with one of the Nafta parties. Overall, officials and stakeholders briefed say the talks have taken a tentatively promising turn, after Canada came forth with an informal proposal to bridge the gap on U.S. demands over auto production.

“I think it was a positive week. We are moving in the right direction, but there’s a long way to go.” Canada’s chief Nafta negotiator

told reporters Saturday night. “We are still negotiating, and that’s the main thing.”

But the complicated struggle over ISDS is characteristic of the challenges the negotiators are up against. The Trump administration’s opt-out proposal would mean that the country opting out wouldn’t be subject to arbitration claims from companies from the other two.

Mexico and Canada, according to people close to the negotiations, say they won’t accept the opt-out proposal because if the U.S. were to leave the system, as would be expected, it would protect U.S. companies by allowing their complaints to go to arbitration but wouldn’t allow Mexican and Canadian companies to use the system in challenges against the U.S. government.

The possibility of dismantling the system has worried big companies, who are lobbying for its preservation by pressing U.S. lawmakers to insist that any Nafta deal contain some form of investor-state dispute settlement. Lawmakers get a vote on any major Nafta overhaul, so they can use their influence with Mr. Lighthizer to press to keep the dispute system.

The system has especially strong support from investors in long-term projects, such as energy exploration, that might be sensitive to domestic political changes.

Mexican and Canadian officials have said that they’d prefer to remove the investor-state provision from the three-way Nafta agreement and form their own bilateral investor pact rather than remain a part of a system under Nafta where different countries have different rights, according to people familiar with the talks. Under a bilateral system between Canada and Mexico, the U.S. wouldn’t be included, so Washington wouldn’t face arbitration challenges, but its companies also wouldn’t enjoy protections in the other two countries. One official said the bilateral proposal is in its very early stages but Canada and Mexico believe it is worth pursuing.

While business groups like ISDS, labor unions and environmental groups see the system as giving companies a green light to invest abroad while cutting the risk of environmental fines or regulatory actions by foreign governments.

The Trump administration has also proposed scaling back the types of challenges that companies could bring under the system. Mr. Lighthizer has expressed public skepticism about other forms of dispute settlement that result in binding outcomes for the U.S. government. So far, the U.S. has never lost an investor arbitration case under Nafta or any other agreement.

The proposal to scale back ISDS, supported by some labor and consumer groups, would only allow investors to seek damages from foreign governments if their assets were essentially stolen through “direct expropriation,” according to advisers to Mr. Lighthizer and people following the talks. Regulatory actions that indirectly impair an asset wouldn’t be grounds for a challenge under the system.

U.S. congressional staffers who back traditional Washington trade policy point out that the legislation that allows for the Nafta negotiations requires Mr. Lighthizer to strike a deal with strong investor protections. When the U.S. was negotiating with 11 Pacific partners in 2015, many congressional Republicans and some Democrats insisted on a strong version of investor-state dispute settlement, and business groups say lawmakers are pushing back against the Trump administration’s proposals.

—Paul Vieira contributed to this article.

Write to William Mauldin at william.mauldin@wsj.com

BEIJING: China on Monday defended its military infrastructure build up in Doklam and claimed that the area falls within its sovereignty. Beijing said Sino-India differences
read more
AFRICAN AMERICAN (E)

A lot can change in 15 years. Babies are suddenly teenagers ready to get behind the wheel of a car. Social media websites can debut,
read more
TECHNOLOGY

The Women's Podcast: “Just go and have your smear test”

The Women's Podcast: “Just go and have your smear test”  Irish Times1 million screened by CervicalCheck in 10 years  Irish HealthFund-raiser calls for younger women to be
read more
INDIAN (B)

The firm had registered a net profit of Rs 856 crore in the corresponding quarter of the last fiscal, Tech Mahindra said in a statement.

The consolidated revenue stood at Rs 7,776 crore in the quarter under review, up 2.9 per cent from Rs 7,557.5 crore in the year-ago period, as per Indian Accounting Standards. The earnings per share stood at Rs 10.73 for the December quarter.

“Our focus on digital transformation, continuous reskilling of our workforce to meet the future demands of our market space is showing encouraging results,” Vineet Nayyar, Vice Chairman of Tech Mahindra said.

He said that the results also demonstrated the companys focus on execution, that is key in an “otherwise unpredictable macro business environment”.

On sequential basis, net profit was up 12.8 cent while the revenue was up 2.2 per cent.

The company added 18 active clients compared to the trailing September quarter, taking the active client count to 903 at the end of December 2017.

C P Gurnani, CEO and MD of Tech Mahindra, said: “We have continued to clock steady growth in the quarter across revenue, profits and new business. Our commitment to DAVID strategy (Digitisation, Automation, Verticalisation, Innovation, Disruption) has yielded marquee deals in the digital space”.

Tags assigned to this article:

A plan by US President Donald Trump’s national security team to build a government-owned 5G network, designed to counter the threat of China spying on
read more
BUSINESS

CLOSE With the rise of Listeria in the headlines, here's everything you need to know about the potentially fatal illness. Sierra OshrinFile photo taken in
read more
ENTERTAINMENT

"I Am Woman" Singer Helen Reddy 'Memba Her?!