plans to quadruple the number of its giant data-center complexes over the next two years, a move that could significantly boost capital spending as it tries to chip away at

massive lead in the cloud-infrastructure market.

The expansion thrusts Oracle into an expensive arms race against the market’s biggest spenders, Amazon,

Google. Those giants are working to wrest away traditional Oracle database customers shifting from their own data centers to web-based computing services.

Oracle is building 12 new data-center “regions” to deliver cloud-infrastructure services, in which businesses rent online computing and storage. Two are slated for the U.S., two in Canada and one each in India, Japan, the Netherlands, Singapore, South Korea and Switzerland.

One is planned for China, where Oracle will work with

, in accordance with government rules requiring outsiders partner with local companies. Another is slated for Saudi Arabia, which has been looking to bring more tech expertise to the kingdom. The Wall Street Journal earlier reported Saudi Arabia’s state-owned oil giant was in talks with Google to build a large tech hub there.

Oracle has other locations in mind for expansion beyond the 12 new sites, said

The plan is a costly gambit. A region running at full capacity can cost several hundred-million dollars, analysts say. Combined, Amazon, Microsoft and Google last year had $41.6 billion in capital expenditures and capital-lease deals, up 33%. While not all spending covered data-center construction, the three have identified it as a major focus.

Oracle’s capital spending totaled $2.04 billion in the 12 months ended Nov. 30. It declined to say whether its plan was influenced by the new U.S. tax law, or how much the expansion will cost. Upfront expenses, though large, will match demand, Mr. Johnson said.

“The way you actually end up spending billions is you have a large business and you are continually adding capacity,” he said. Oracle announced the expansion Monday at its CloudWorld conference in New York.

Companies are willing to spend lavishly because the payoff could be immense. The world-wide market for cloud services—business-process services, management and security apps and more—grew 19% to $260.2 billion in 2017, according to

While Oracle is a leader in cloud-based applications, as well as management and analytics tools—known as software-as-a-service and platform-as-a-service—the business-software company is far behind in cloud infrastructure.

Amazon Web Services dominated the market with 44.2% share in 2016, according to Gartner, while Microsoft Corp. was No. 2 at 7.1%. Oracle barely registered, with just 0.3% share.

Oracle’s executive chairman, from firing barbs at Amazon. When Oracle introduced a new version of its cloud-infrastructure service in September 2016, he brashly predicted “Amazon’s lead is over.”

lead cloud analyst at Ovum in London. “Oracle is now spending the money it needs to spend and showing intent, rather than making noise.”

Mr. Illsley thinks Oracle can make up ground since many critical computing operations running on the company’s technology are only just beginning to move away from corporate data centers. Oracle can also benefit by selling its cloud applications and analytics tools, which will run in the new regions, to customers in markets where they weren’t previously available.

In addition to the 12 new regions, Oracle currently has three that deliver the latest version of its cloud-infrastructure services, in Phoenix; Ashburn, Va.; and Frankfurt. A fourth opens next month in London.

Regions are generally comprised of two or three compounds, loaded with racks of custom-designed servers. Cloud vendors spread those compounds across each metropolitan area to ensure continuous operation in case one is compromised.

Write to Jay Greene at Jay.Greene@wsj.com 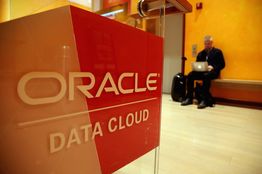 This article has been sent to