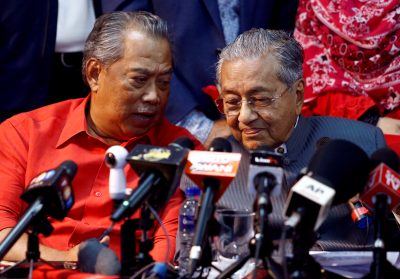 To understand this change in government, it is essential to recognise how much the ‘old’ features of Malaysia’s political system persist. The nexus between politics and business, the personalistic fragmented party system and the dominance of a racial–religious paradigm constrains reform of the political system. Old practices have derailed hopes of a ‘new’ Malaysia — at least for now.

Politics in Malaysia has long been a business. Politicians join parties to make money, and once in power, politicians distribute patronage and favours to their business cronies.

In the 21 months of the Mahathir-led Pakatan Harapan government, these practices were not fundamentally changed. Anti-corruption efforts concentrated on top figures from the previous government and enforcement was unevenly applied.

The introduction of checks on such corruption and cronyism slowed down decision-making and provoked disgruntlement among the business elite. There was pressure to return to ‘business as usual’ and strong resistance to reform. With a focus on austerity, Harapan did not offer a new vision for economic growth or lay out an economic reform plan.

Instead, patronage continued. Many oligarchs reconfigured their alliances, changing their company names and loyalties. New entrants clamoured for a piece of the action, while displaced groups complained. Competition between cronies searching for favours fed destabilisation and conflict between political elites.

Malaysia’s political parties are largely feudal institutions that revolve around party elites and factions. When trust between personalities breaks down, parties split and coalitions collapse. Former prime minister Mahathir Mohamad and President of the People’s Justice Party Anwar Ibrahim were unable to resolve their long-standing distrust, as alternative contenders for power played on these differences.

The May 2018 election result divided the parliament into smaller political groupings, breaking the hold of the one-party dominant system. A stable coalition system requires compromise and cooperation, but the old practices of ‘divide and rule’ predominated.

Mahathir honed these divisive practices in his first stint as prime minister (1981–2003). But the former governing party UMNO was most apt in using these tactics, as its efforts along with ambitious members within the Harapan coalition afraid of being sidelined with a potential transition to Anwar were successful in displacing Mahathir and paving the way for their return to power. Starved of access to resources and with its elites desperate to have their legal charges removed, the stakes for a return were personal.

Cooperation among political parties was further hampered by entrenched ethnic politics. Party identity remains closely tied to race, religion and region. Ethnic labels were used to justify not working with other political parties and narrowed the parameters of party cooperation in the battle to form a majority in parliament. The continued myopia on race and religion in understanding Malaysian politics is at odds with a society that is comprised of multiple identities and is primarily interested in securing a decent living in an era of increased vulnerabilities.

The dominant ethnic paradigm creates tensions over political legitimacy.  Debate persists over who commands the support of the Malay majority or the majority of elected representatives in parliament. There are also disagreements over whether the decision on who should rule should be made by traditional Malay royal institutions, in parliament or returned to the electorate through new polls.

In recent months in opposition, UMNO and PAS (with greater Malay representation in parliament) stoked fears of Malay displacement vis-a-vis other ethnic communities and mobilised around ‘protecting the faith’ to gain electoral support.

PAS rode these sentiments with the hope that returning to power would allow them to implement Islamic governance. But these parties remain divided on whether their interests are best served by working in the new coalition or calling new polls, as there are differences over how best to represent the Malay majority and elite interests.

The current outcome is a victory for Malay and Muslim conservatives and a continuation of racialised politics and practices that were used to shore up support in the UMNO-dominant era. This contrasts with the more multi-ethnic and inclusive alternative that in its infighting underperformed economically and did not adequately deliver on many of the promises of reform voters expected.

The chronic ‘old’ features of Malaysian politics where power is tied to greed, oligarchic competition, personality and the mobilisation of identity politics underscored the government transition and are continuing to shape its future.

But the political battle is not over, as those calling for reform and a different ‘Malaysian’ future —notably an impatient youth, active civil society and more empowered opposition — may win out, as they did in May 2018.

As much as support for democracy is strong, these sentiments compete with calls for greater stability and attention to the economy. Many Malaysians are exhausted by the politicking and the messiness of Malaysia’s democratic governance.

The new Prime Minister Muhyiddin is now beholden to the parties that put him into office. They will expect political appointments, economic contracts, legal dismissals of past politicians and a deepening of race and religion-based politics. If they do not get what they want, they may abandon him.

While Muhyiddin lacks a broad public mandate to enact reform, he holds a prime ministerial position with considerable levers of power. With low expectations, he may offer some surprises as he tries to forge his own legacy.

For now, attention centres on whether the new government can shore itself up in a difficult economic climate, survive a delayed vote in parliament and not collapse from the same destabilising forces that brought it into office.

Bridget Welsh is a Senior Research Associate of the Hu Feng Center for East Asia Democratic Studies of the National Taiwan University, a Senior Associate Fellow of The Habibie Center and a University Fellow of Charles Darwin University. She is also Honorary Research Fellow of the University of Nottingham Malaysia’s Asia Research Institute.