New Zealand policymakers need runs on the board 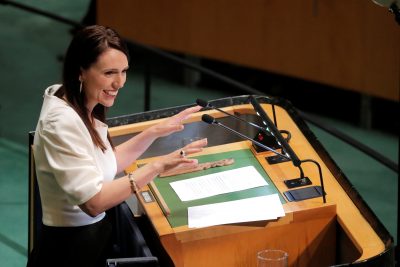 The soft diplomacy of New Zealand’s new government — exemplified by Prime Minister Jacinda Ardern who smiled and exuded friendship and compassion throughout 2018, her first full year in power — has so far not been used to implement strategic changes. The year was one of preparations rather than initiatives.

It began with some fast diplomatic footwork to reconcile promises made in the 2017 election campaign with the realities of Asia Pacific economic integration. Through this effort, New Zealand continued at the forefront of the Comprehensive and Progressive Agreement for Trans-Pacific Partnership (CPTPP) and was one of the six signatories that enabled it to come into force on 30 December 2018.

The Trans-Pacific Partnership (TPP), now the CPTPP, has its roots in a joint New Zealand initiative. When efforts by the trade ministers of Singapore and New Zealand to reinforce the trans-Pacific nature of regional economic diplomacy failed to attract the principal targets — the United States and Australia — they instead formed an agreement with Chile. On the accession of Brunei, the trilateral agreement became the Trans-Pacific Strategic Economic Partnership (TPSEP or P4). Later the United States adopted the TPSEP as a convenient instrument for its ‘pivot to Asia’ and the agreement then became the US-led TPP.

On US withdrawal, Japan became de facto leader of the remaining 11 TPP members and the CPTPP was the eventual result. What began as an initiative to reinforce trans-Pacific institutions became an element of East Asian economic diplomacy, albeit with some Latin American members. Despite scepticism among some TPP supporters in Wellington that the agreement would persist post-US withdrawal, there was no substantial change in New Zealand policy during the transition from the TPP to the CPTPP.

The Ardern government is also demonstrating continuity in New Zealand’s approach to the US–China conflict. New Zealand seeks to be an independent voice, heard only when New Zealand interests are at stake. Official ‘New Zealand interests’ are not always the same as those of local activist groups, and so calls for both stronger support and criticism of the United States are common.

The government did issue a national security statement in July 2018 that contains wording suggesting stronger criticism of Chinese actions in the South China Sea than is usual for Wellington. A few months later in November New Zealand security services advised that inclusion of Chinese-company Huawei’s equipment in the country’s communications network would have national security implications.

The issue remains to be decided by telecommunications providers. It would be unusual for the government not to endorse the recommendations of its security services, but its promotion of open government would create some tension between confidentiality of security issues and transparency of trade decisions.

New Zealand shares world-wide worry about greater Chinese influence on domestic and international thinking. Much attention has focussed on criminal activity against a university teacher who wrote critically about China. But police enquiries have not generated any evidence that Chinese were involved, and still less that any links to the Chinese government could be established.

Ultimately, the political standing of the government rests on domestic rather than international issues. The government did not come into office with carefully planned initiatives. It is a coalition government and its character as Labour-led, in coalition with New Zealand First and with the support of the Greens means that it could not have developed a coherent policy thrust in opposition. Even the Prime Minister’s priorities of climate change and child poverty have so far been addressed through enquiries rather than resolutions. Much depends on the development of the 2019 Budget — the country’s first ‘Wellbeing Budget’.

The government is to be complimented on a serious endeavour to pay attention to the range of influences on wellbeing. But in practice the Wellbeing Budget is likely to differ from its predecessors only in that the promoters of its initiatives — or even those arguing for continued funding of existing programs — will be required to produce better cost-benefit analyses than before. The packaging will be different but the outcome will be similar to the previous government’s ‘social investment’ approach to budgeting.

Firm fiscal discipline has been maintained but will be tested. In particular, it remains to be seen whether the government’s new Tax Working Group has created a capital gains tax that makes productive investment attractive relative to property, redistributes rather than entrenches the existing wealth distribution and generates revenue while excluding family homes. It is a tall order.

Government supporters want results and 2019 is the last full year left before the election campaign of 2020 becomes dominant. ‘Runs on the board’ are required.

Gary Hawke is a Fellow of the Royal Society of New Zealand and a member of the Academic Advisory Council of the Economic Research Institute for ASEAN and East Asia.