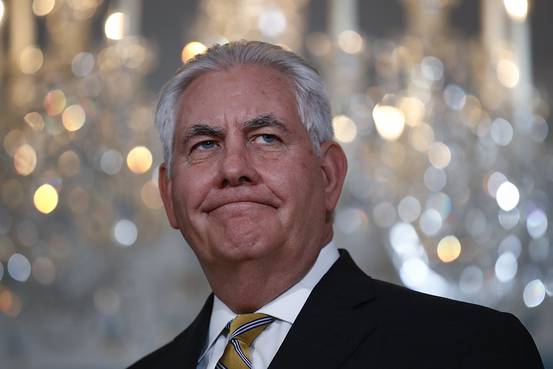 for a five-city trip through the Middle East, where he already was set to confront strains.

assuring him that the U.S. supports Israel’s right to defend itself, Undersecretary of State Steve Goldstein said. The call took place after an Israeli plane was downed following an air skirmish, triggering a larger Israeli assault on Syrian antiaircraft batteries.

Mr. Tillerson will visit Egypt, Kuwait, Jordan, Lebanon and Turkey—some of them places where administration policies on Palestinians and Syria already have aroused concern. In Cairo, Mr. Tillerson will meet with leaders of a government that Washington wants as a counterterrorism partner. But the government of Egyptian President

also faces international criticism over its crackdown on civil liberties and political opponents.

In Kuwait, Mr. Tillerson will participate in a meeting of foreign ministers about the fight against Islamic State and attend part of a conference aimed at Iraq’s reconstruction.

The U.S. government won’t be making any pledges at the conference. But the Export-Import Bank of the United States is expected to sign a memorandum of understanding with the Iraqi government at the conference, agreeing to facilitate aid financing, administration officials said. The officials declined to specify the amount, but it is expected to be in the neighborhood of $2 billion to $3 billion.

State Department officials said about 2,300 private-sector representatives will attend the conference, including more than 100 from U.S. companies.

In Jordan, Mr. Tillerson will sign a memorandum of understanding with the country that is meant to boost economic, defensive and security cooperation.

Jordanian officials are particularly concerned about the Trump administration’s moves to declare Jerusalem the capital of Israel and begin to relocate the American embassy there, as well as its slashing funds to the United Nations’ Palestinian refugee agency formally known as the United Nations Relief and Works Agency, or Unrwa.

Jordan and Lebanon both receive funds from Unrwa to provide services to Palestinian refugees in both countries.

The U.S. is also considering a decision to cut much of the $251 million it gives to the Palestinians each year, officials said.

Mr. Tillerson’s last stop, in Ankara, could be the toughest of the trip, as tensions have heightened between the U.S. and Turkey over Turkey’s offensive against a Syrian Kurdish force in northwest Syria. The Kurds in the area around the city of Afrin have ties to Kurdish forces allied with the U.S. in Syria.

American officials are concerned that Turkey will launch another offensive in Manbij, a Syrian town in an area where U.S. troops are operating. A U.S.-backed ground force led by Syrian Kurds took control of the northern Syrian city of Manbij from Islamic State more than a year ago.

In Saturday’s military clash between Syria, Iran and Israel, the U.S. blamed Iran, saying it was escalating threats in region. The exchange took place as the Trump administration was preparing for the conflict’s diplomatic phase following success in a campaign against Islamic State.

The State Department has been looking to appoint an envoy for the Syrian conflict and is expected to announce one in the coming weeks.

Write to Felicia Schwartz at Felicia.Schwartz@wsj.com

India, Thailand and other Southeastern Asian countries meet to speed up measles elimination