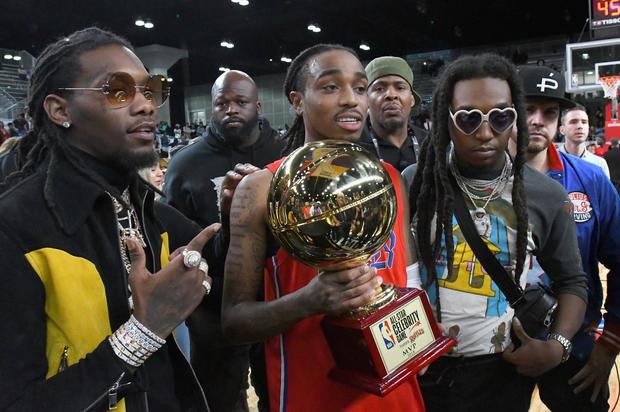 Migos are no strangers to the TV screen. They’ve partnered with some of the major sports leagues to release exclusive material during the playoffs, acting as one of the more consistent musical acts to call on when you need a slogan. The trio of Quavo, Offset and Takeoff had another great year in 2018 and they look to start off 2019 by dropping Culture III. It feels like Offset’s solo project will never arrive and although we’re still waiting on an announcement regarding that, many of us have moved on. The trifecta recently signed on with Mountain Dew to promote their line of drinks, getting a little motivational in a brand new commercial.

Released today, Migos star in an advertisement alongside Holly Holm and Joel Embiid. Holm looks intense while Embiid pulls off some moves with a blindfold over his eyes. The rappers show off their talent… on a trio of goofy-looking tricycles as they ride around with the crew. They even debuted a new song for the occasion, coming through with “Let’s Do,” which is currently exclusive to the commercial.

The general goal of the ad is to get people on their feet and exercising. Whether you’re on a silly tricycle with your boys or dunking the ball one-handed, grab a Mountain Dew and get going. Although water is probably a better option…

Nancy Pelosi, Like Any Good Parent, Knows How To Treat A Temper Tantrum