The Dow posted triple digit gains Wednesday, turbocharged by tech stocks like Microsoft and IBM. As Fred Katayama reports, the S&amp;P 500 closed above 2800 for the first time.
Video provided by Reuters
Newslook

Microsoft continues its upward trajectory under CEO Satya Nadella, who has successfully pivoted the software company to a cloud-focused model.(Photo: Microsoft)

SAN FRANCISCO — Microsoft continues to ride high on the strength of cloud-based computing, announcing adjusted earnings Wednesday that beat analyst expectations thanks to a 25% jump in sales associated with Office365 and cloud services.

But factoring in a one-time accounting charge of $13.8 billion related to the Trump administration’s new tax bill targeting corporate cash held overseas, Microsoft reported a loss of $0.82 per share.

Leading the way in the quarter was Microsoft’s $9 billion productivity and business processes segment, which includes Microsoft Office, the Office365 cloud suite and LinkedIn. Its cloud services and storage business, which includes server software and Azure, grew 15% year over year to $7.8 billion.

The main stagnant spot remains the company’s Surface computers, whose sales grew just 1% in the past quarter. Microsoft has struggled with its hardware ventures, which include failed attempts at entering the smartphone market. Its most unique and promising device, the HoloLens augmented-reality goggle, remains expensive and unavailable to mainstream consumers. The personal computing segment inched up 2% to $12.2 billion. 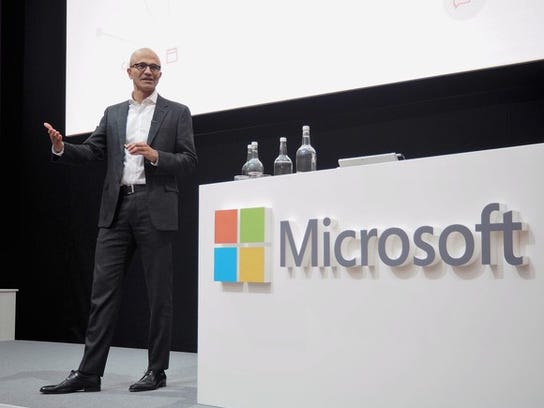 Microsoft CEO Satya Nadella has not yet commented on what it will do with an estimated $130 billion in overseas cash. (Photo: Microsoft)

But analysts focusing on CEO Satya Nadella’s cloud-obsessed tactic were buoyed by the quarter.

“Microsoft continues to be a pillar of strength on the cloud front, and the Azure growth story is still in the early innings,” says Daniel Ives, chief strategy officer at GBH Insights. “The company has become a model of consistency.”

This is the 10th-straight earnings beat for Microsoft, whose market cap recently topped $730 billion. Under Nadella, who took over in 2014, Microsoft’s stock price has nearly tripled to $95. Last quarter, Microsoft announced that it had met its goal of hitting a $20 billion annualized run rate for its commercial cloud-computing business.

Prior to a post-earnings call Wednesday with analysts, Nadella has not yet commented on what it will do with an estimated $130 billion in overseas cash. Like other U.S. companies, notably rival Apple, Microsoft can take advantage of a one-year window that lowers the tax rate on such profits to 15.5%. That’s less than the 21% tax rate on corporate profits under the new law, itself a drop from the 35% prior rate.

Experts say companies can consider buying back shares, paying off debt or spending on new research-and-development initiatives with savings from paying taxes at the lower rate.

Some of the biggest names in tech — including Alphabet, Oracle and Cisco — are expected to take advantage of the opportunity, following Apple’s recent announcement that it would pay a $38 billion tax bill to bring home $250 billion.

How does flu kill healthy people?

Rosenberg and Ecofit Backward-Curved Fans in High Demand for Air…