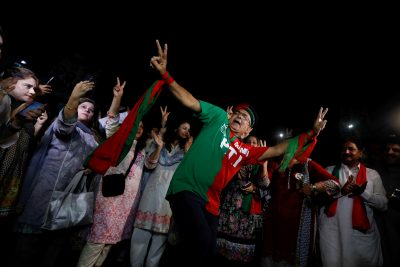 The big story in Pakistan last year was political transition. After a long, intense electoral campaign, the country held national polls in late July 2018. The election brought to power a party, Pakistan Tehreek-e-Insaf (PTI), which had never held power on a national level.

The closing months of the year and of the opening period of PTI rule exposed the party’s inexperience. But they also showcased the bold new form of governance that it had promised.

The first seven months of the year marked a desperate effort by a beleaguered ruling party, the Pakistan Muslim League (Nawaz) (PMLN), to reassert itself on the campaign trail. It had been weakened by corruption scandals for years and cut down to size by a powerful Pakistani military unhappy with the government’s policies towards militancy and India.

The PMLN suggested that the military was using a variety of tactics — including arrests of PMLN leaders, crackdowns on pro-PMLN media outlets and efforts to convince PMLN members to switch parties — to exploit the electoral playing field in the PTI’s favour.

The PTI’s resounding victory only intensified allegations of pre-election rigging. The PTI rejected the accusations, countering that its campaign — driven by a singular focus on anti-corruption that resonated across a society sick of the country’s dirty politics — made it the more popular party.

In reality, both arguments have merit. The machinations of the military, which has a deep legacy of interfering in politics and had no interest in a PMLN victory, are difficult to deny. At the same time the PTI has cultivated a strong support base that ranges from young, middle-class urbanites to rural religious conservatives.

Immediately after the election, Prime Minister-elect Imran Khan promised to follow up his party’s longstanding pledge to practice a cleaner and kinder brand of politics. He also laid out an array of breathtakingly ambitious objectives that ranged from eliminating poverty to recovering offshore wealth harboured by previous governments.

Khan’s initial messaging was inclusive and conciliatory, raising hopes that he was ready to bridge Pakistan’s sharp and toxic partisan divides. But the PTI’s inexperience quickly came into play. Islamabad struggled to articulate a policy to address a deepening balance of payments crisis, something the new government had identified as a top initial priority. Islamabad ended up pursuing the same short-term, band-aid strategies as its predecessors: securing bailout funds from wealthy partners like Saudi Arabia and seeking a new loan from the International Monetary Fund.

Separately, the PTI suffered a major gaffe when it invited Atif Mian, a prominent Pakistani economist at Princeton University, to serve on a new economic advisory council only to ask him to step down a few days later because of pressure from religious hardliners. Mian is Ahmadi, a deeply persecuted religious minority in Pakistan.

The government did make some positive impressions during its early months in power. It took a hard line against religious extremists — a rarity in Pakistan, where hardliners often act with impunity. After a landmark Supreme Court decision that acquitted a Christian woman sentenced to death for blasphemy, members of Tehreek-e-Labbaik Pakistan (TLP) took to the streets in November 2018, calling on blasphemers to be executed and even imploring Pakistanis to assassinate judges.

After concluding an initial agreement to end the protests, Islamabad detained dozens of TLP members and in early December arrested the movement’s leader, Khadim Rizvi, on terrorism and sedition charges. Even critics of Khan who accuse him of being soft on militants acknowledged this bold move.

As the year drew to a close, the new government was presented with several challenges and opportunities that will play out in a big way in 2019. One major obstacle is the Chinese loans pouring into Pakistan for the China–Pakistan Economic Corridor (CPEC), and their deleterious impact on Pakistan’s rising debt. While CPEC is an important infrastructure project for Pakistan, Khan’s government is keen to ensure that CPEC loans are more financially viable without antagonising Beijing, a critical ally.

A major opportunity lies in geopolitics. Washington launched full-scale efforts to pursue a peace deal with the Taliban in Afghanistan in 2018. It has called on Islamabad, which Washington believes enjoys strong leverage over the Taliban because of the presence of the group’s leadership in Pakistan, to help bring the insurgents to the table.

US–Pakistan relations floundered in 2018, thanks in part to several bullying tweets from President Donald Trump. But a cordial letter from Trump to Khan in December 2018 requesting Pakistani assistance telegraphed a US desire to work with Pakistan on the goal of Afghan reconciliation. If Islamabad serves as a helpful peace partner, its relations with Washington and Kabul will improve in a big way.

Pakistanis will soon find out just how effective their new government will be in its efforts to tackle challenges and capitalise on opportunities.

Michael Kugelman is Deputy Director for the Asia Program and Senior Associate for South Asia at the Woodrow Wilson International Center for Scholars in Washington, DC.

After initial protest, Cong-ruled states back doubling of GST threshold