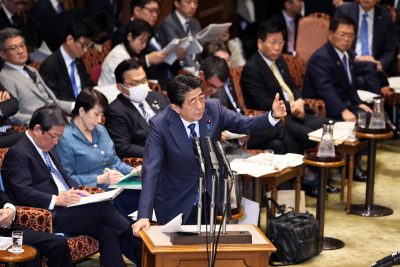 The novel coronavirus (COVID-19) is testing Japan’s approach to crisis management and national security. In early March 2020, the Shinzo Abe government — after being criticised by the public for its slow and piecemeal measures to combat the spread of the infection — announced the revision of a 2012 special measure law originally designed to protect Japan from new types of influenza. The revisions enable the government to declare a state of national emergency to deal with the virus if necessary.

The government also imposed a de facto immigration ban on Chinese and South Korean nationals until at least the end of March and added a ban on foreign nationals who have stayed in some European countries, two provinces of China, and a part of South Korea and Iran. The use of the 2012 law for COVID-19 was criticised by some in Japanese media and opposition politics, but much of the public, some of whom in a state of panic, wants the government to take stronger measures.

While COVID-19 has become a pandemic spreading from East Asia, Japan has experienced increasing infection in domestic society since the end of January. Yet the Abe government has not been proactive in its response to the unfolding crisis. The government initially thought the epidemic was confined to select Chinese provinces and the Diamond Princess cruise ship anchored in Yokohama. It focussed on controlling the infection from those clusters but its policy was myopic elsewhere. Initially, immigration restrictions were declared only against travellers from two Chinese provinces and the cruise ship was quarantined for two weeks.

But COVID-19 had already entered Japan and government policy failed to contain the outbreak. Reports on the gradual spread of infections increased public anxiety and fear. Citizens who foresaw an emergency rushed to buy face masks and toilet paper, both of which disappeared from shelves in drug stores and supermarkets. Facing public dissatisfaction, the government announced a recommendation to close schools and cancel public events. This caused further public anxiety.

Tackling public anxiety and fear must be considered a critical aspect of national security policy when dealing with a pandemic. National security is the protection of nationals from perceived threats and risks. As part of their duty to protect citizens, policymakers must provide defence and intelligence capabilities and ensure the efficient operation of government institutions designed to cope with crises. National security policy must work to uphold a feeling of public safety. While Singapore and Taiwan are praised for successfully dealing with both COVID-19 and the accompanying public anxiety, Japan has failed in the latter point.

Two things should be pointed out. First, Japanese national security decision making has proven to be institutionally weak on health issues. Comprehensive policy proposals were delayed and the best opportunity for containing COVID-19 in Japan early on was lost. In 2013, Japan created its National Security Council (NSC) for policy coordination and crisis management. But it is focussed on traditional security issues such as defence and diplomacy. The NSC is not set up for handling non-traditional threats such as epidemics and infectious diseases.

Special meetings were held with Japanese Minister of Health, Labour and Welfare Katsunobu Kato in the NSC. But the NSC’s bureaucratic body — the National Security Secretariat — does not include permanent members of the Ministry of Health, Labour and Welfare (MHLW). The NSC is therefore ineffective in its implementation of comprehensive measures designed to contain COVID-19 or any future epidemic. Despite presiding over the administration of medical care in Japan, public relations and information sharing from the MHLW on COVID-19 has been inadequate.

Second, the Abe government fails to understand the complexities of public anxiety and has made little progress on the public relations front. Abe seems to believe that a decisive political posture is the best way forward. But his government’s decision to revise a law which allows for the declaration of a state of national emergency is a double-edged sword. Hinting at or declaring an emergency may escalate public anxiety. Domestic economic activity is shrinking considerably under the self-restrained mood in Japanese society and an economic crisis is looming.

Sufficient communication between the national government and the public must accompany government policy to combat COVID-19. This will moderate public anxiety. Taiwan and Singapore succeeded in this by creating centralised epidemic command centres. These ensure the active presence of political leaders in the media alongside accurate and efficient information sharing.

Yet Abe’s speech in early March on COVID-19 was too short to respond to public anxiety. The MHLW has periodically held specialist meetings and publicised information about the virus on its website. But it has not gone far enough to meet public needs. As a result, the Japanese public has come to rely on often inaccurate and unverified information from television and social media to protect themselves from infection.

With poor crisis management, the Japanese people have lost their resilience and are struggling to cope with the unfolding crisis. Many fear for themselves and individual safety is being prioritised at the expense of others. This is clear in the panic over toilet paper and face masks. Social cohesion that is critical for resilience in crises is at risk of gradually breaking down.

To avoid a deeper economic and social crisis, the Abe government should focus on managing public anxiety in addition to delivering high quality medical services. But it must also create new institutional frameworks to do this. This crisis will be difficult to overcome, but hopefully Japan’s national security apparatus will learn and evolve from the experience.

He is author of China in Japan’s National Security (Routledge, 2020).

White House, Fed rolling out plans to save US economy