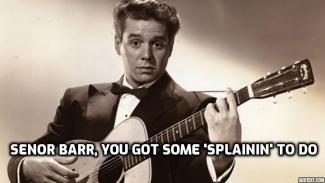 Let’s see. The man handpicked by Donald Trump, specifically for the purpose of undermining the Special Counsel’s report, exonerates him of obstruction of justice.

It doesn’t matter that Mueller’s report does no such absolving of Trump.

William Barr, Trump’s new Attorney General, is the man who auditioned for the job by sending out an unsolicited 19-page memo to Justice Department officials criticizing Special Counsel Robert Mueller’s focus on obstetrician of justice.

While Mueller’s report does not conclude Trump committed a crime, it also does not exonerate him, no matter the spin put out by Barr and jubilant Republicans.

Of course the Dems want to see the entire Mueller report and all the supporting documents. They are not going to accept a dinky 4-page letter concocted by Trump’s AG.

House Judiciary Committee Chair, Jerry Nadler, wants to haul Barr before his committee to do some testifying.

Tweeted Nadler, “In light of the very concerning discrepancies and final decision making at the Justice Department following the Special Counsel report, where Mueller did not exonerate the President, we will be calling Attorney General Barr in to testify before House Judiciary in the near future.”

While Trumpites are partying like it’s 1999, rest assured this is not over by a long shot.

John Dean, former White House counsel to Richard Nixon, has warned that William Barr may be hiding something “very ugly” inside the report filed by Mueller.

In an interview with CNN’s Don Lemon, Dean said, “ We haven’t really seen the underlying report but I have some suspicions that the reason he boiled this down the way he did is because it’s not very attractive, Don, (Mueller’s) words are different than Barr’s, I suspect.”

We will soon get to hear Barr’s words, under oath, in front of a congressional committee.

Let’s see how good Barr is at “splainin’.