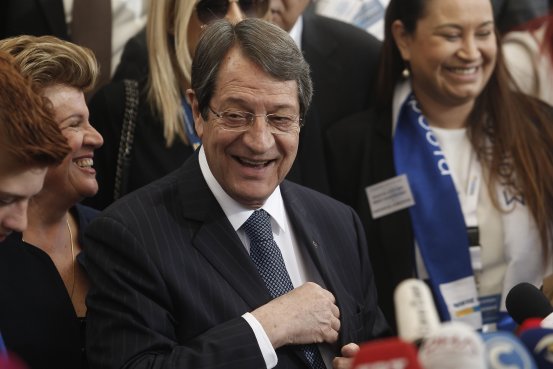 was the top finisher on Sunday’s first round of presidential elections, but failed to garner a majority of votes needed to avoid a runoff.

The conservative leader will face

an independent candidate backed by Communist party AKEL, in a runoff on Feb. 4. Mr. Anastasiades was leading all the opinion polls in the run-up to the vote. He said that this second 5-year term in office would be his last if he is re-elected.

Mr. Anastasiades secured a 35.5% support while Mr. Malas was backed by 30.2% of voters. Centrist

of the far-right party ELAM got 5.7%. About 28% of the Cypriots abstained from voting.

The 71 year-old Mr. Anastasiades is credited with leading the country’s economy back to growth after it nearly collapsed in 2013 and for leading talks to bring the divided island closer than it has been in more than four decades.

Cyprus’s €10 billion ($12.43 billion) bailout program was launched in 2013, when Cypriot banks collapsed and the country had to impose capital controls to prevent a complete financial meltdown. Things began acrimoniously when Germany and the International Monetary Fund forced Cyprus to inflict losses on bank depositors to help pay for the rescue.

The country exited the program three years later and its economy is growing again. The Mediterranean island’s economic growth is seen at 3.5% in 2017 and is expected to ease but remain robust at 2.9% in 2018, according to European Commission estimates.

Cyprus—a European Union member in the eastern Mediterranean close to Turkey and Syria—has been split between the Greek south and the Turkish north since 1974. Numerous peace talks over the years have failed.

The latest round of reunification talks collapsed last July, marking the end of a more than two-year process that had been seen as the best chance to resolve the decades-old conflict.

Mr. Malas of the Communist AKEL party has accused the incumbent president of not being bold enough to reach an agreement. Mr. Anastasiades reiterated his commitment to reaching a deal.

An agreement could deliver economic benefits, such as allowing the installation of natural-gas pipelines connecting Europe and the Middle East.