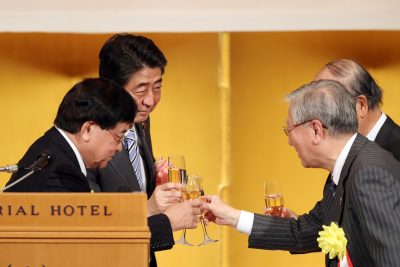 Japanese corporate governance is back in the news — and not in a good way — with the dramatic arrest of Nissan CEO Carlos Ghosn for financial misconduct. But this singular case should not be taken as an indictment of Japanese corporate governance more broadly. New York Times coverage of the unfolding CBS scandal offers a portrait of executive entrenchment eerily similar to that reported at Nissan: ‘A culture where this behavior could have gone unchecked for so long with so much knowledge is really troubling’, noted one source. ‘This is a disaster for CBS shareholders’.

Japanese corporations have been actively reforming their governance over the past few years, appointing multiple outside directors and establishing nomination and compensation committees.

Most recently, the Tokyo Stock Exchange revised the Corporate Governance Code and the Financial Services Agency announced guidelines for investor–company engagement in 2018. Japanese companies are responding with further reorganisation of their boards.

But are these reforms changing corporate governance in practice?

Japanese corporations are targeting something between the traditional Japanese model and the US model. The former relied on long-term relationships with employees, banks and business partners. The main bank would monitor company performance and intervene if performance deteriorated. This allowed executives to manage for the long-term without being distracted by short-term results, but it also meant that they were under less pressure to improve financial performance.

The US model favours shareholder capitalism, whereby corporations seek to maximise returns for investors. With dynamic labour and mergers and acquisitions (M&A) markets, managers risk replacement or hostile takeover if corporate returns falter. Institutional investors can deploy exit (selling off shares) or voice (demanding reforms) to discipline companies. The US model puts more pressure on managers, but it can also foster short-termism.

The corporate governance reforms in Japan aim to promote constructive dialogue between investors and companies. But will investor engagement really discipline management? Prospects are dim, for two reasons.

First, passive fund engagement cannot be counted on. Passive asset management, which seeks to give investors stable returns by investing in funds linked to stock market indexes, has been booming. Article 4-2 of the revised Stewardship Code urges passive fund managers to engage with companies. But it is not realistic to expect passive investment funds to engage with companies since they invest based on stock indexes. They would serve their clients better by forgoing engagement and lowering management fees than by engaging with companies to improve the long-term performance of particular stocks.

Some reformers propose collective engagement by multiple institutional investors, but it seems unlikely that such arrangements will take off. Japan’s Government Pension Investment Fund calls for new business models from passive funds, including investor engagement, but this has not produced any specific proposals to date.

Second, active investor engagement cannot be counted on either. Active investment managers strive to achieve returns higher than the stock indexes by investing in particular stocks based on their own research, so they have a stronger incentive to engage with companies. But many still forego engagement and just rely on short-term trading to achieve returns that will justify their management fees. And when active investment managers do engage with companies, they often press for higher dividends or share buybacks to boost share prices in the short term rather than for long-term growth.

Foreign investment can contribute to the dynamism of Japanese equity markets and the growth of the economy. If foreign institutional investors feel that Japanese companies are not transparent and do not value shareholders, then Japanese companies need to address those concerns.

But they should not do so by adopting the US model. Scholarly research demonstrates that the core features of the US model — such as stock options, share buybacks and outside directors — do not necessarily contribute to corporate value in the long term. Too much emphasis on shareholder returns can come at the expense of the broader range of stakeholders.

Instead, Japanese companies should update and improve the Japanese model of corporate governance. They should promote investor engagement aimed at raising corporate value rather than short-term returns. They should strengthen accounting and auditing functions, and improve procedures for the selection, replacement and training of top managers. And they should reinforce relations with stakeholders, including employees and business partners.

Steven K Vogel is Professor of Political Science at the University of California, Berkeley. You can follow him on Twitter at @StevenKVogel.

Takashi Asano is Professor of Accounting and Finance at Tokyo Metropolitan University. You can follow him on Twitter at @takasano128.

An earlier version of this article appeared in Japanese in Kigyou Kaikei.