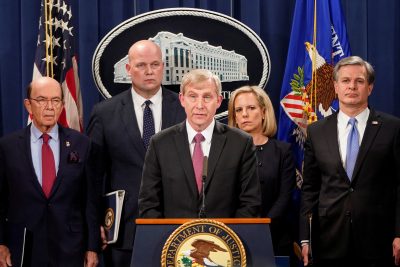 Despite the vociferous attacks on Canada and the United States for detaining Huawei Chief Financial Officer Meng Wanzhou, critics — including the Chinese government — rarely base their criticism on legal grounds. But a notable exception criticises the US legal charges against Meng and Huawei as unsubstantiated, selective and a violation of international laws against extraterritoriality. It even accuses Canada of participating in ‘extraterritorial kidnapping’. This line of argument, which has been echoed in Chinese government talking points, is badly mistaken in its analysis of the legal rules governing US criminal prosecutions and the nature of international law regulating extraterritoriality and extraditions.

The claim that Canada arrested Meng without any evidence ‘to substantiate’ US allegations against Meng badly misconceives the legal standard for evidence needed to arrest a suspect. At the time of Meng’s arrest, the United States had already provided Canada with a sworn affidavit from a federal prosecutor describing the charges that the United States planned to bring against her. The affidavit explained that Meng would be charged with committing bank fraud against US banks in violation of US law and it detailed the evidence that would be provided to a court to substantiate this charge.

This type of sworn affidavit serves an important function because it requires the arresting authority to explain to a judge the factual and legal basis for arresting someone. In Meng’s case, an independent US judge issued an arrest warrant based on the information in the affidavit and the same information was provided to the Canadian authorities before they arrested Meng in December 2018. There are thus simply no grounds to denounce Meng’s arrest as failing to be substantiated. If Meng’s arrest was based on unsubstantiated allegations, then every single arrest of any individual in the United States would also be unsubstantiated.

Condemning Canada’s ‘unsubstantiated’ allegations while failing to mention China’s long record of detaining individuals without even revealing allegations, much less substantiated ones, is disappointing. Such detentions are much closer to ‘kidnapping’ than anything Canada has done to Meng.

This line of criticism against the Meng arrest also rests on a factual mistake in understanding the charges against Meng, and a curious and misguided understanding of the international laws governing extraterritoriality. As the US and Canadian governments both underlined in public statements that were reported widely by news media, Meng is not being charged with violating US sanctions against Iran. She is being charged with violating US laws against bank fraud by allegedly lying about Huawei’s relationship with Skycom, a Chinese company doing business in Iran. According to the US government, Meng’s statements misled US banks into unwittingly violating US sanctions against Iran, and exposing those banks to criminal liability under US law.

These charges are not the controversial ‘secondary’ sanctions that regulate a foreign company’s dealings with other foreign entities in a foreign jurisdiction. The charges against Meng are based on US legal jurisdiction over US banks. It also appears to be based on Meng’s trips to the United States to meet and allegedly defraud those same US banks. Every country in the world, including China, asserts the right to apply its laws to protect its own citizens and certainly to regulate conduct occurring in its own territory.

Finally, the suggestion that the charges against Meng are a departure from past US responses to banks for violations of US sanctions — noting that corporate officers in previous sanctions cases were not arrested and that their corporate entities merely paid fines — is misleading. It misstates the nature of the charges against Meng, who is being charged with bank fraud and not sanctions violations. US corporate executives are frequently charged, convicted and jailed for bank fraud. The charge of selective prosecution simply lacks a factual foundation.

There are many legal complexities to Meng’s arrest, and more recent US indictments of Huawei for stealing trade secrets and obstructing justice. There might be legal challenges raised in Canadian or US courts by Meng’s lawyers. There are also good policy questions about whether or not these legal cases should be seen as part of US trade policy towards China. But certain legal arguments, many of which have been echoed by the Chinese government, are neither credible nor persuasive. Critics of US policy against Huawei should find other, more serious arguments if they wish to win support for their positions.

Julian G Ku is the Maurice A Deane Distinguished Professor of Constitutional Law at Hofstra University in Hempstead, New York.