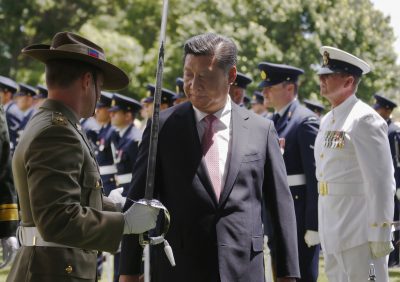 Recent comments made by Australian officials about Taiwan over the past few weeks are less statecraft and more reminiscent of a fictional account of the leadup to a Third World War.

During an ANZAC Day speech, the Secretary of the Australian Department of Home Affairs Mike Pezzullo warned that ‘in a world of perpetual tension and dread, the drums of war beat’. Australian Defence Minister Peter Dutton similarly mused that conflict in the Taiwan Strait should not be discounted, stressing the preparedness of the Australian Defence Force in the event of a potential regional conflict. Meanwhile, Assistant Defence Minister Andrew Hastie reminded military personnel that their ‘core business’ was the ‘application of lethal violence’.

These most recent comments come against a backdrop of Australian government statements and documents that consistently identify the Indo-Pacific as an arena of ‘greater strategic competition’ as the US–China rivalry gathers apace. Yet those very same comments predictably triggered another round of so-called ‘wolf-warrior diplomacy’ from Chinese officials and commentators.

Chinese Major General Jin Yinan decried Australia as ‘white supremacist’ for lending moral support to Taiwan. The Global Times, a mouthpiece of the Chinese Communist Party, claimed Australia was ‘sick’ and accused Canberra of ‘trying to muddy the waters on the Taiwan question’. It also warned that ‘if Australia uses force against China, China will definitely deal a heavy blow to Australia’. At a time when Washington has sought to engage Taiwan more closely, this was a clear warning to Canberra not to follow suit.

Australian politicians and strategic analysts need to prudently reflect on how best to manage the issue while considering the broader strategic context of a deteriorating regional security environment and fractious bilateral relations with Beijing. Yet Australian Prime Minister Scott Morrison took things further after he appeared to confuse the one-China Policy with the ‘one country, two systems’ model in Hong Kong — a position he obstinately refused to correct.

Not only did Morrison’s comments emphatically contradict Australia’s official policy, but they also offended both sides of the political divide in Taiwan. After witnessing Hong Kong’s grim experience under the ‘one country, two systems’ model with the Chinese-backed national security law and subsequent crackdown on civil-society, Taiwan has come to categorically reject this formula with a new vigour. Morrison muddied the waters by sending out the wrong message on a highly sensitive issue for the region.

Observers should be alarmed at Prime Minister Morrison’s seeming incomprehension, especially given the stakes for regional stability and security. There is a consensus that any violent resolution of the Taiwan issue would be calamitous for the region, with Australian Chief of Defence Staff Angus Campbell declaring that the ‘future of China and Taiwan needs to be a future that is resolved peacefully’ and warning that any war would be ‘disastrous’ for all involved. This includes Australia, since any US military involvement would likely bring pressure upon Canberra to activate the ANZUS alliance treaty, and potentially drag in a range of US allies. The loss of life and economic costs would be catastrophic.

Still, there are ongoing questions about how Canberra can strike the right note on such a charged issue. While Australia is caught between principled support for a fellow democracy and the risks of supporting the United States and being entangled in an actual military crisis, it is difficult to see how Canberra’s recent tub-thumping rhetoric represents a coherent diplomatic posture.

Former Australian prime minister Kevin Rudd contends that ‘the public language of Morrison, Dutton and Pezzullo on China, Taiwan and the possibility of war in the last week serves zero national security purpose’. Strategic scholar and former secretary of the Australian Department of Defence Hugh White argues that ‘[Australia’s] best interests would be served by urging [US President Joe Biden] to be cautious, and by being cautious ourselves’.

Perhaps it is best for Canberra not to make too much ‘noise’. Australia cannot on its own substantially affect a resolution of the situation in the Taiwan Strait through diplomacy. In order to avoid a nightmare scenario in the Pacific, Australian politicians should calm down their rhetoric while scrupulously communicating the need for dialogue and diplomacy aimed at a peaceful resolution of regional tensions.

At a time when Australia is reeling from Chinese economic coercion and accused of ‘sabotaging’ bilateral relations, adding more points of contention is not advisable. With China freezing several channels of communication with Canberra and conducting repeated incursions into Taiwanese airspace, the road ahead to persuade Beijing to take a more measured approach is already difficult enough without adding unnecessary obstacles.

Thomas Wilkins is a Senior Lecturer at the Department of Government and International Relations (GIR), University of Sydney.

Joe Biden has grasped a basic truth: wages are too low and profits are too high