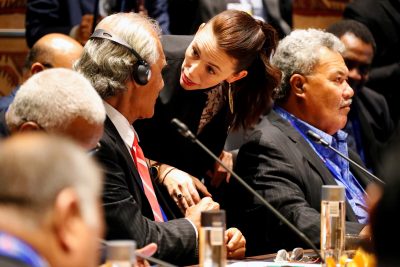 New Zealand Prime Minister Jacinda Ardern has continued with her ‘relentlessly positive’ approach in both rhetoric and policy, demonstrating poise and grace while dealing effectively with an opposition National Party. Opposition leader Simon Bridges is a distant second (in single digits) in ‘preferred prime minister’ polls, with his continued leadership in jeopardy. 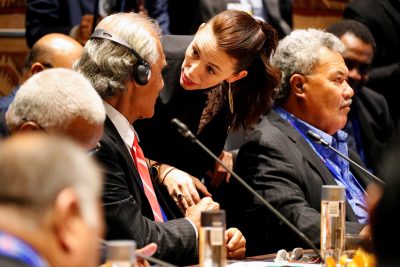 Having been out of power for nine years, Ardern’s Labour Party is making significant progress on a range of policy fronts. The government has raised the country’s minimum wage and resumed contributions to the superannuation fund established under the last Labour-led government (but deferred during the National government’s time in office). It has also initiated an ambitious housing program intended to build 100,000 homes over a 10-year period.

Young New Zealanders and their parents are being catered for by an end to first-year tertiary fees, while senior citizens benefit from subsidies for their power bills over the country’s chilly winter months. Some steps are shared with Labour’s coalition partners, including a suspension of further offshore oil and gas drilling (the Greens) and a ban on purchases of homes by non-resident foreigners (New Zealand First).

Upon entering office, the interest and excitement generated by Ardern’s 2017 election campaign transferred itself to the international stage. She was given celebrity treatment during her September 2018 visit to New York, with televised appearances seldom reserved for New Zealand prime ministers. She set a precedent at the UN General Assembly by bringing her three-month-old baby into the chamber. Travels to other international meetings — APEC, the East Asia Summit and the Pacific Islands Forum — produced their own moments.

With a general election still two years away, Ardern and her government have the initiative. In December 2018 the government announced its intention to hold a binding referendum on the use of marijuana for recreational purposes. The timing of the referendum, to be held at the 2020 general election, was immediately criticised by an opposition convinced that the referendum will boost turnout among the country’s left-leaning young voters. A promise to enact legislation to reduce child poverty in New Zealand was also fulfilled in December, a concept so attractive that only a solitary dissenting voice prevented the vote from being unanimous.

The Minister of Finance approaches 2019 in a strong position, with a stable economy evidenced by meagre unemployment, substantial economic growth, low interest rates and the prospect of larger-than-expected multi-billion dollar surpluses. He can pursue further spending initiatives in his next budget, already foreshadowed by an economic blueprint focussing on New Zealanders’ ‘well-being’.

The three-party coalition is functioning smoothly despite intermittent differences of opinion over policies and priorities. New Zealand First’s leader Winston Peters performed responsibly as acting prime minister during Ardern’s six-week absence on maternity leave, and the Greens’ co-leader James Shaw is taking a leading role in promoting climate change initiatives. Even parliamentary approval of the revised Trans-Pacific Partnership accord, achieved without the Greens’ support but with the backing of the National Party, was unable to disrupt the relationship among the coalition partners.

An ongoing challenge for Prime Minister Ardern — one that she seems, by inclination and outlook, perfectly capable of meeting — is to maintain the government’s positive approach and demeanour. National remains ahead of Labour as the country’s most popular party in many polls despite setbacks and embarrassments involving several of its members of parliament. The political challenge for the Prime Minister is to make her government so successful that Labour moves past National, while allowing the Greens and New Zealand First to retain credit for their distinctive contributions. This is never an easy task, but a necessity in New Zealand’s electoral politics.

In December 2017, I observed that ‘the new government’s principal challenge for 2018 will be to demonstrate that it is able to work towards some of its more ambitious goals — ending child poverty, reducing inequality and acting on climate change — while protecting what New Zealanders also value: a strong and competitive economy’. Looking back, Prime Minister Ardern’s government is managing more than creditably to strive towards these objectives. The 2019 political year will see a Labour–New Zealand First–Greens government with more than a year’s experience finding its way against a conservative opposition weakened by leaks and scandals, and so offering limited hindrance.