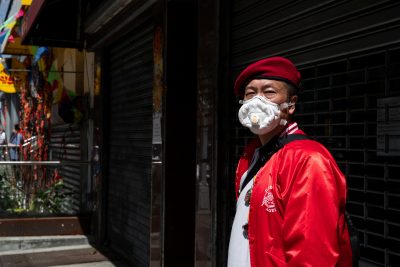 In June 1982, Vincent Chin was beaten to death by two white men in Detroit at a time when the Japanese auto industry was becoming highly competitive in the United States. Chin, a Chinese-American, was assumed Japanese and was fatally attacked by two laid-off autoworkers. Almost 40 years later on 27 September 2020, Tadataka Unno, a Japanese pianist working in New York City, was chased and knocked to the ground by a group of teenagers shouting anti-Chinese racial slurs. He was hospitalised with a broken collarbone.

The United States has a history of anti-Asian racism. In the second half of the 19th century, the Chinese immigrants were the targets of racism, including the lynching of Chinese in Los Angeles in 1871 and mass killings of Chinese in Rock Springs, Wyoming by white mobs in 1885. In 1882, US Congress passed the Chinese Exclusion Act, which prohibited the immigration of Chinese labourers to the United States. Chinese immigrants were blamed for depressed wages and rising unemployment and were considered carriers of disease. Following Japan’s attack on Pearl Harbor, about 120,000 Japanese Americans were incarcerated in concentration camps between 1942 and 1946 by President Franklin Roosevelt’s executive order.

Anti-Asian racism is once again on the rise in the United States. Since his election in 2016, President Donald Trump has repeatedly incited racism across the board, most infamously calling Mexican immigrants ‘drug dealers, criminals and rapists’.

The United States is now leading the world in both positive cases and deaths from COVID-19. Nearly 9 million Americans — including Trump himself — had been infected and over 230,000 had died by the end of October 2020. But instead of reflecting on his own policy failures, Trump is conveniently blaming China and the World Health Organization (WHO) for the country’s poor handling of the pandemic.

The Trump administration’s irresponsible and intentional use of the terms ‘Chinese virus’ and ‘kung flu’ is fuelling anti-Asian racism. Amid COVID-19, verbal and physical attacks on Asian Americans are rising. More than 2500 such attacks were reported between mid-March and early August 2020 according to Stop AAPI Hate, a national coalition that tracks anti-Asian discrimination.

On 17 September 2020, the US House of Representatives voted to pass a bill condemning anti-Asian sentiment amid the pandemic, with all 164 votes against coming from Trump’s fellow Republicans. Following the legislation’s passing, Congresswoman Grace Meng — who introduced the bill — received racist abuse.

The toxic political climate is making it difficult for the United States to maintain normal educational and cultural exchanges with other countries. In August 2020, the University of North Texas (UNT) abruptly cancelled its visa program for 15 visiting Chinese scholars who receive funding from the Chinese government-supported Chinese Scholarship Council. These scholars must now return to China — a decision which sparked thousands from the UNT community to sign a petition to reverse the move to no avail.

As part of its ‘China Initiative’ to counter alleged Chinese espionage, the US Department of Justice stepped up efforts to screen Chinese scholars and students at airports for suspected spying. US border agents carried out 1147 searches of Chinese nationals’ electronic devices in 2019 — a 66 per cent increase from the previous year. The number of searches conducted on people of all nationalities rose by only 23 per cent over the same period.

Not all US schools have turned hostile to international students or academic exchanges — many maintain a zero-tolerance policy toward racism. A professor at the University of Missouri was relieved of teaching in August for making inappropriate remarks to a Chinese student. In response to finding out the student was from Wuhan, the professor said ‘let me get my mask on’. Despite his apology, many found the comment xenophobic.

The Trump administration’s unfriendly approach toward international students is undermining US soft power and global leadership as many international students have become disillusioned and are looking for opportunities in other countries. Its sweeping ‘espionage’ claims against Chinese students and its decision to terminate the Fulbright programs in China and Hong Kong are undermining people-to-people exchanges that form the bedrock of bilateral relations. Many US colleges are now losing talent from China and other countries, talent that not only enriches academic vibrancy and diversity on US campuses but also contributes to school revenues and local economies.

To combat racism in the United States, Asian-Americans are again turning to supporting anti-racism movements and joining civic groups to condemn white supremacy. It is encouraging that Congresswoman Grace Meng recently introduced the Teaching Asian Pacific American History Act, a bill to promote teaching and learning of Asian Pacific American history in schools across the United States.

To strengthen its soft power and global leadership, the United States should be re-adopting a welcoming and inclusive policy toward international students and immigrants, rather than scapegoating Asians for its failed response to COVID-19. The US government should stop blaming immigrants for all the economic and social problems at home and renounce all policies and practices that hurt America’s global standing and image as a beacon of hope for all.